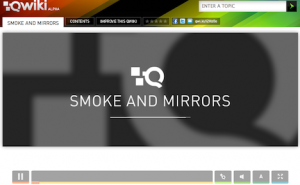 Since Qwiki was announced last year, it’s been constantly gaining momentum and media-share. As most describe it, it’s a “Visual Wikipedia” or “Information Experience” as the company defines it.

I’ve had different views on it since they first announced it – and today I wouldn’t be surprised if the Qwiki website feels like smoke and mirrors to you. It does to me – and it maybe intentional: so that they can improve the underlying technology.

Now – what technology?
I hope their main technology is not putting images and video together in a slide show but really the information curation process.

How do you select the best piece of information from a large source?
After looking through a few subjects I believe they use something close to this to classify what to show from a Wikipedia article:
- First (one or few) paragraphs
- First sentences under sections mentioning something like “History”
- Sentences that have the most proper names and/or dates.
- Pieces of content that from Wikipedia that seem to be replicated a lot in other places

In a sense, Qwiki could have created for Content what Google’s PageRank was for indexing relevant Pages.

Take for example, a look at the Time’s qwiki: http://www.qwiki.com/q/#!/Time
- It will read the first paragraph from Wikipedia;
- Then the last paragraph of the introduction as it’s the next phrase with the most number of other people’s name;
- Then it reads something that seems totally out of place, but is part of the book of Ecclesiastes – which is highly replicated in other websites making Qwiki think it’s very relevant for the topic.

Now, where could they take this beyond a “Wikipedia Slideshow”?

IF (and a big IF) their technology is capable of:
- Content Summarization: semantic analysis, classification and relevance(ranking) identification
- Two-way Speech: recognizing voice commands and interaction
- Geo-contextualization: transform the content analysis based on your location

then they have great applications…

Examples:
- integrated in car systems: if you ask about the Empire State Building, it won’t start saying that it’s a landmark in New York if you are already in New York, but would give you some basic info/history, how to get there and perhaps opening/visitation times. Now, if you are NOT in NY, then it would explain a little bit more about it and not give you visitation times if you are very far from there.

- home systems: when you wake up, it’s able to tell you that you need to leave 10 minutes earlier today because traffic will take you 5 minutes more, and you’ve got 20% more emails than the average that you’ll probably want to read before heading into that 9AM meeting…

And there are many more applications of similar technology. So I really hope the current Wikipedia-driven slideshow is smoke and mirrors to perfect this algorithm through crowdsourcing. Many people looking through subjects they are interested on and providing feedback into how relevant the summarization was.

Now, if they focus only as a “wikipedia-replacement” to be used at home/work planning to include ads in it later, that’s passive consumption and they use to call that TV.